El Salvador is the smallest and most densely populated country in Central America, and is still struggling to overcome is civil war that took place in the 80s. The country’s history is deeply intertwined with agriculture. The production of sugar, cacao, coffee, maize, fruits and vegetables have given this nation a pivotal role in the global food system and the challenge of ensuring that these food systems remain sustainable. The Association for the Development of El Salvador (CRIPDES) is one of the country’s largest grassroots organizations; originally formed in 1984 to assist war victims in the countryside suffering human rights abuses, and now has a base of ~300 rural communities. Since before the civil war, many Salvadorans had been marginalized by the agro-industrial model of chemically dependent, large-scale agribusiness, exposing residents to a plethora of toxicants. Furthermore, the agribusiness system results in extreme degradation of the country’s natural resources, with roughly 80% soil degradation and 99% of their rivers contaminated.  Unfortunately, many rural farmers defend the use of destructive pesticides as it has become too familiar after decades of agrotoxic practices. However, the introduction of agroecology – the application of ecology to the design and management of sustainable agroecosystems – has seen positive change in the eyes of many farmers.

In recent years, agro-ecology has gained in popularity as an alternative to conventional production systems and agribusiness. According to the Food and Agriculture Organization of the United Nations (FAO), “agroecology can support food and nutrition security while fostering resilience and adaptation to climate change”. The Government of El Salvador has recognized the need to promote a transition towards sustainable farming practices to better manage soil and water conservation but the local NGOs are the most influential amongst local farmers. Local environmental NGO, the Salvadoran Ecological Unit (Unes), establishes “agroschools” to teach the basic concepts of agroecology to ensure food sovereignty and sustainability. In Los Largatos, women grow vegetables with organic compost that they produce, changing planting techniques in favour of the environment. The Sustainable School Feeding Program by the Ministry of Education, teaches students how to produce food in the school garden and how to eat a nutritional meal from products purchased from local family farmers. Recently, CRIPDES was a leader in creating the Popular Movement of Organic Agriculture, an organization utilizing agroecology as a tool for liberation.

El Salvador may be a tiny nation, but it is a country of rich agricultural history, heartbreaking violence and the home of the ever-so-tasty pupusa. Through the introduction and expansion of agroecology, it will be exciting to see their advancements in food systems and sustainability. 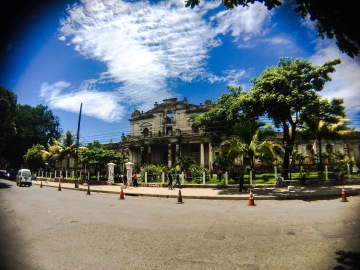